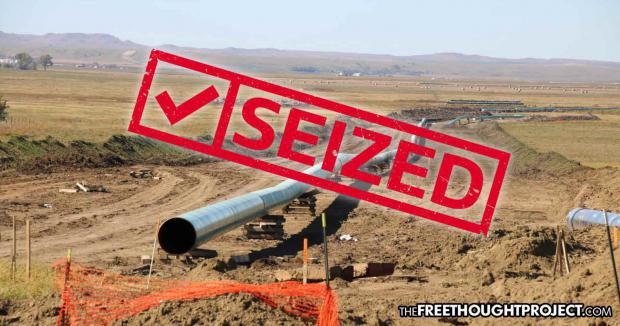 The entire idea behind eminent domain being in "the public interest" can be, and often is, so distorted as to force compliance of Americans to give up their private property so that often a corporation or government can gain control of the land for profit.  Such seems to be the case for Oregon cattle rancher Bill Gow, a man who voted for President Trump thinking it would be good for him and America.  Now, he's seeing things a lot differently.

(ProPublica) This past spring, while much of the country focused on COVID-19, three men who work in an obscure corner of the federal government weighed a question with profound effects across the American West. On the docket was a proposal to build a natural gas pipeline that would slice through hundreds of miles of Oregon wilderness, private lands and areas sacred to American Indians. The plan, which had been repeatedly rejected by state and federal regulators for more than a decade, would give a Canadian company the right to seize the land it needed from any American property owner who stood in the way. The government panel that would make the decision can meet in person. But on this March afternoon, it was conducting the people's business in writing — government by what amounts to dueling memos.

The members of the Federal Energy Regulatory Commission are typically the kind of people President Donald Trump has in mind when he derisively talks about the "deep state": faceless bureaucrats who pull the levers of power with little scrutiny or accountability. Except these were Trump's bureaucrats. Two of the three members had been appointed by the president, whose enthusiasm for any project that might be cast as boosting America's fossil fuel industry is nothing if not predictable.