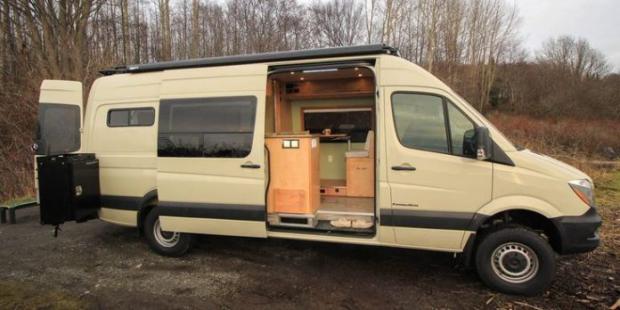 This Mercedes Sprinter van, for instance.

For openers, it's the only new Mercedes you can still buy in the U.S. with a diesel engine. Which is a good idea, in the event the world comes unglued because diesels go farther and last longer. They also pull stronger – and that's a boon for a van, especially one you might decide to live in.

Many people use the Sprinter van for exactly that. Because they are ideally suited for that. Mercedes offers the van in short and long wheelbase iterations (144 and 170 inches, respectively) as well as half ton (1500) and three-quarter-ton (2500) and with standard, medium or tall roof choices, a gas or diesel engine (in the 2500) and almost limitless customization options, including seats for three  . . . or fifteen.

Plus, the one thing that comes standard with every Sprinter which you can't get in any other van:

It's a Mercedes van.

Which means it's a nicer van in its bones than other vans like the Dodge Ram ProMaster,  Ford Transit and Nissan NV.

Once you're behind the wheel, it's not hard to imagine you're driving an E-Class sedan – because you almost are driving one. One that can take an E-Class for ride – in the back. That might be an exaggeration – the Sprinter's max payload capacity isn't high enough to handle a two-ton E-sedan rolled into the cargo area.

And you could absolutely pull one behind you – if you get a Sprinter with the optional 3.0 liter turbodiesel engine. It makes 325 ft.-lbs. of torque – comparable to the torque made by a typical 5 liter gas V8.