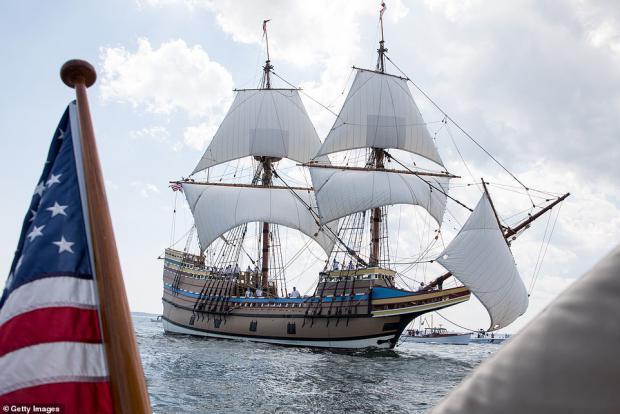 Thousands of cheering people lined the shores as Mayflower II cruised back into her homeport following an extensive multi-million dollar renovation.

Amid honking horns and screaming sires the much loved vessel, a replica of the ship that brought the Pilgrims to New England 400 years ago tied up at Pilgrim Memorial State Pier on the Plymouth Waterfront.

Commenting on the ship's new appearance, Gilligan said: 'We couldn't believe the colors. It was awesome, just beautiful.

'Before it was all dull.'

Paying tribute to the historic moment, the Plymouth Police Department wrote on Twitter: 'On her way home! #MayflowerII #Mayflower400.'

The triumphant return of the 106ft Mayflower followed a three-year, multimillion rehabilitation project at the shipyards of Mystic Seaport Museum in Connecticut.

The vessel, which first sailed to Plymouth in 1957, needed extensive reconstruction after near-constant exposure to the elements tied up at State Pier.