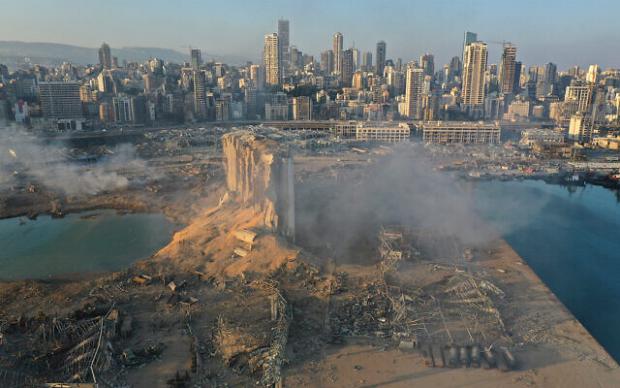 Lebanon has placed every official responsible for the security of Beirut's port for the last six years under house arrest as it investigates a massive explosion which has devastated the city.

The country's political leaders vowed those responsible for the tragedy would 'pay the price', but customs officials pointed the finger of blame back at them - saying they were repeatedly warned of the danger but failed to act.

It came as an astonishing photo emerged, purporting to show the dock's Warehouse 12 filled with ammonium nitrate - with the highly explosive chemical stored in simple construction sacks with no other protection in place.

The dangerous load is understood to have been abandoned by Russian businessman Igor Grechushkin in September 2013 before eventually being transferred to the port where it remained for six years.

A ship carrying the load was detained en route from Batumi, in the ex-Soviet republic Georgia, to Mozambique, and never recovered.

On Tuesday evening a fire that started in Warehouse 9 ignited 2,750 tons of the chemical - sparking an explosion with three kilotons of force, equivalent to a fifth the size of the Hiroshima nuclear blast.

Raghida Dergham of the Beirut Institute yesterday said: 'Storing Ammonium Nitrate in a civilian port is a crime against humanity that must not go unpunished.

'Condemnations are not enough. I'm safe but devastated. I lost friends. I lost my apartment. Had I been home, I would have lost my life.'

The health minister tonight announced the death toll had risen to 135, with some 5,000 wounded and dozens still missing in Beirut, which officials have called a 'disaster city'.

Microsoft 365 services are coming back after major outage