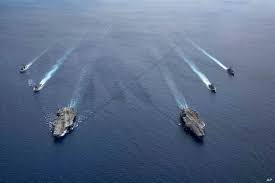 The pro forma official spin, via Rear Adm. Jim Kirk, commander of the Nimitz, is that the ops were conducted to "reinforce our commitment to a free and open Indo-Pacific, a rules-based international order, and to our allies and partners".

Nobody pays attention to these clichés, because the real message was delivered by a CIA operative posing as diplomat, Secretary of State Mike "We Lie, We Cheat, We Steal" Pompeo: "The PRC has no legal grounds to unilaterally impose its will on the region", in a reference to the Nine-Dash Line. For the State Dept., Beijing deploys nothing but "gangster tactics" in the South China Sea.

Once again, nobody paid attention, because the actual facts on the sea are stark. Anything that moves in the South China Sea – China's crucial maritime trade artery – is at the mercy of the PLA, which decides if and when to deploy their deadly DF-21D and DF-26 "carrier killer" missiles. There's absolutely no way the US Pacific Fleet can win a shooting war in the South China Sea.

A crucial Chinese report, unavailable and not referred to by Western media, and translated by Hong Kong-based analyst Thomas Wing Polin, is essential to understand the context.

This Is ALL A LIE! - The Global Chinese Takeover EXPOSED!