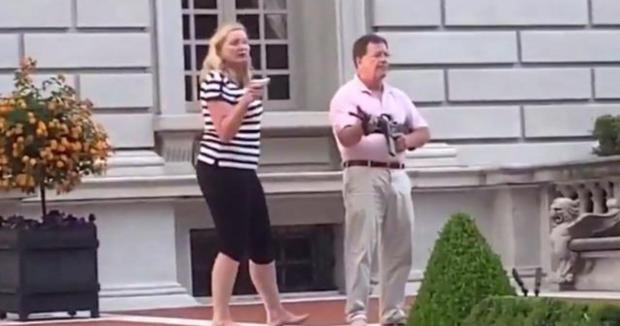 President Donald Trump on Tuesday defended the St. Louis couple who last month wielded guns to defend their home from activists who walked through their gated neighborhood, and hinted he may take action in the case.

The president suggested in an interview with Townhall that the couple, Mark and Patricia McCloskey, had the right to defend themselves with their personal firearms. Authorities on Friday served a search warrant at their home, confiscating a rifle from the couple.

"These people were standing there, never used it, and they were legal, the weapons," Trump continued. "And now I understand somebody local, they want to prosecute these people. It's a disgrace."

On June 28, the couple were eating on their back porch when dozens of people entered their private neighborhood through a gate marked "Private Street."

The McCloskeys grabbed firearms and stood outside their home, urging the group to keep going and not stop.

As they did, some of the group shouted threats at them.

Civil Unrest In Chicago: This Is What They Want To Happen Everywhere!

How to Find Some REAL Normalcy in a World Gone Mad