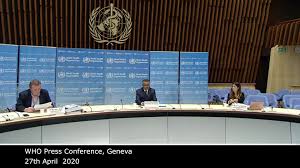 Among the earliest failures of the WHO—one which only became apparent last week—was the organization's omission of how it initially learned of the disease outbreak.

WHO Director-General Tedros Adhanom Ghebreyesus said on April 20 that "the first report [of the disease] came from Wuhan, from China itself," suggesting that the Chinese Communist Party informed the organization of the pandemic in the first days of the outbreak.

Yet, an updated timeline published last week states instead that WHO's Country Office in China first learned of the disease from "a media statement by the Wuhan Municipal Health Commission" on Dec. 31.  The lack of clarity led multiple media outlets to report that Chinese authorities told the WHO's China office about the outbreak.

But according to the WHO's timeline, Chinese officials only provided the organization with information on the initial outbreak of cases there on Jan. 3.

Chinese officials have been accused of covering up the extent of the outbreak, including when it first arose in Wuhan. Some experts have estimated that, had China's Communist government revealed the disease's outbreak when it first began and requested international help, the worst of the global pandemic likely could have been averted.

No masks, then masks

The WHO has also whipsawed regarding the question of face coverings. The organization had previously declared that "the wide use of masks by healthy people in the community setting is not supported by current evidence and carries uncertainties and critical risks." Among those risks, according to the WHO, were "breathing difficulties," "self-contamination," a "false sense of security" and a "diversion of resources from effective public health measures."