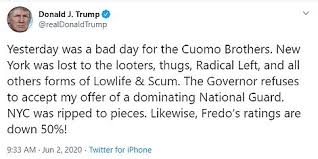 More than 700 people have been arrested now since the start of the looting, the NYPD Commissioner said

It is also in place now until Sunday morning. NYC was due to start reopening from COVID-19 lockdown on Monday morning

In The Bronx, a cop was run over by a crowd and others were beaten by people in the streets

The officer who was run over is now in a stable condition; he was one of six people - cops and civilians - who were taken to the hospital last night as a result of the chaos

Easton CT is Saying NO THANKS to 5G, and We Can Too!

The Pressure to Diaper, Dissipated