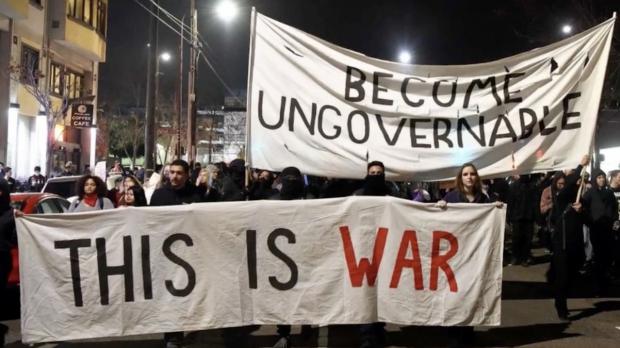 (Natural News) Consider yourself "warned" America. It's not just a home invasion "thriller" movie anymore; it's the beginning of the litmus test for Socialist "Democrat" tyranny. How much will YOU tolerate? On Twitter, the paid-to-destroy people and property organization and extreme Left wing of George Soros, Antifa announced that they would be moving into the residential areas tonight, because they're already bored with the mega-city demolition and mayhem they've caused.

"F-the City" they decry, as groups in Portland announced gathering locations right in the middle of middle-class suburbia-style residential "hoods," nowhere near downtown, to "take what's ours" – whatever that means (probably your money, all your belongings, and your wife and kids to sell on the slave trade dark web).

Twitter shut it all down. Still, millions of screen shots of the posts are flooding truth media. Proof Trump's right about the label as a terrorist organization the military needs to handle, head on. These freaks are talking about home invasions in suburbs, beginning tonight. They're already burning churches. What's next? Mass rape and murder, like in the Purge movie series? Are all Democrat Governors being told to stand down by Obama, Soros and Bill Gates?

Civil War is under way in America: Trump and the U.S. patriots vs. the violent stooges of Soros

The hills have eyes folks. If and when Antifa knocks down the wrong front door or burns the wrong car in the "burbs," they're going to start finding rude awakenings that look like the defense of the Bundy Ranch or the Richmond Capital, with ex-military from Iraq and Afghanistan smoking them all with automatic weapons. That's where it's going if Antifa invades homes in nice neighborhoods. That's exactly where it's going. If you think for one minute Antifa riots have anything to do with George Floyd's death, think again.

Antifa militants are domestic terrorists. They're admitting on video they work for George Soros groups and are paid to destroy things and recruit more people to destroy property and people's lives. Meanwhile, heaps of bricks are showing up at protest locations on pallets, ready to be thrown through store windows and automobile windshields, or at anyone who's wearing anything red.

A year ago, Republican senators Cruz (Tx.) and Cassidy (La.) tried their best to push for the pro-facist "anti-fascist" group to be labeled the domestic terrorists they are (that was after the conservative Portland journalist was attacked).

So Antifa is now bored with destroying cop cars, looting stores, beating to death innocent protesters, and lighting churches and banks on fire, so they're heading into the neighborhoods to confiscate what they claim is theirs. These are convicts and thugs who love getting paid to destroy property and people, because the don't fear jail, where they'll ironically probably die of Covid-19, if they get caught.

The major problem is everybody is wearing a mask thanks to these Democrat governors who said it's mandatory at all times, everywhere, so it's not just Antifa that can't be identified on video, but Black Lives Matter, innocent bystanders, normal peaceful protesters, store owners, and the like.

Now, in America, even if you're a good cop who treats people fairly, you're still the enemy of Antifa, who want complete anarchy and Soros to rule the sick, dying world of "Democrat" morons who think "democratic socialism" is better than having Trump as President. Senator Cruz and Donald Trump are right. It's time for heavily-armed military forces to start pillaging the pillagers and putting them in jail for 10 years to life.

Antifa is a terrorist organization that pays violent psychopaths, buses them into cities from all over the country, and arms them with sticks, flammable propellants, Molotov cocktails and bricks, and pays them bonuses for burning down buildings and recruiting more people to do the same.