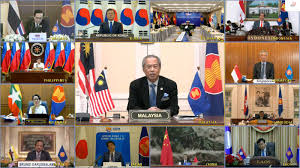 As the US, Australia and other skeptical western states are expected to confront China and about the possibility of an investigation into Beijing's and the WHO's handling of the outbreak during its earliest days.

The coronavirus will be the focus for the World Health Assembly meeting, to be attended by all 194 WHO member states plus observers, and where policies and budgets are reviewed and approved.

But all eyes will be on how countries – including the US, Australia, Canada, France and Germany – pursue an investigation into China's handling of the pandemic within the framework of the global health body. That could include taking the Chinese government to the international court.

Leaders of these countries have already made clear that they want an inquiry, including investigating the origin of the virus, whether it was initially covered up by China, and if Beijing was slow to tell the world that the virus was being transmitted between humans.

The WHO has itself been under fire, attacked for praising China's pandemic response as "transparent" despite Beijing's suppression of whistle-blowers and information at the start of the outbreak.