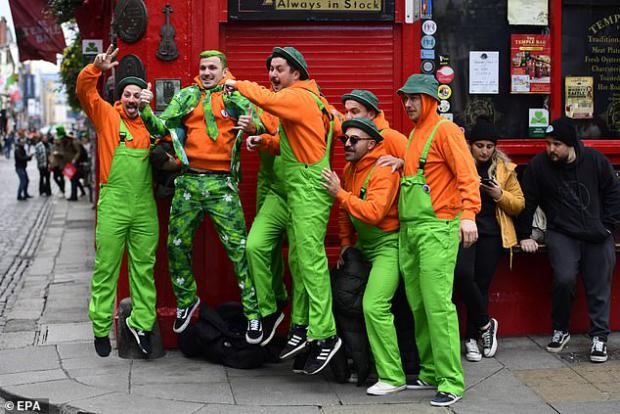 Almost all the usual colourful parades that attract thousands were called off following medical advice for social distancing to slow the spread of coronavirus.

Small numbers of European tourists turned out on O'Connell Street in Dublin where the city's main parade usually takes place. And there were deserted streets in the popular Temple Bar area.

With pubs closed, visitors instead entertained themselves by taking selfies and buying St Patrick's Day merchandise.

Amongst the most amusing videos was a farmer who decided it was his mission to cheer up the nation and set about filming his own farm parade - complete with horse and cow.

Elsewhere, a young girl can be see donning all green and doing an Irish jig, while other children pose alongside their St Patrick's Day-themed houses.

But outside, just one small religious parade took place at Saul, Co Down, where social distancing was observed.

Instead, church bells across Dublin rang out at 11am to act as a reminder of the faith and as an expression of social solidarity.