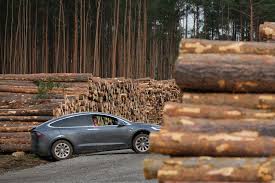 Congratulations, Tesla! You now have the approval of a German court to continue cutting down a massive local forest that has stood in Germany for hundreds of years! Ah, yes, the sweet smell of saving the planet!

Tesla has reportedly "overcome a legal roadblock" in the building of its German Gigafactory, as a German court ruled on Thursday that Tesla can "can resume cutting down trees at a forest site in the small town of Gruenheide" in order to make way for a production facility, according to Bloomberg.

The court found that local authorities were not violating laws when they allowed work on the factory to start, throwing out a complaint that was filed by an environmental group days ago.

Recall, days ago, we noted that the same German court ruled that Elon Musk had to halt his plan to clear the forest in order to build Tesla's German Gigafactory. The court put the stay on Tesla while it considered the challenge from environmentalists, according to Bloomberg.

The court issued an injunction against further construction after it overturned a lower court's ruling against environmental group Gruene Liga Brandenburg, who was seeking to prevent Tesla from clearing the forest.

Ground Leveling For Giga Berlin To Be Completed Soon