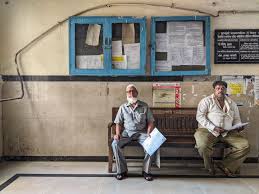 India is the only country Sheikh has ever known: She was born and raised here, as were her parents, grandparents and great-grandparents. But she worries that one day soon, she will be asked to prove it.

Ever since Prime Minister Narendra Modi's government passed a controversial citizenship law in December, many Indian Muslims have been in a state of heightened alert. The law has fueled anxiety that the government's next step will be to conduct a long-promised nationwide citizenship test, which Muslims see as an excuse to target their status in India.

Now Muslims across the country are racing to collect property deeds, land records, graduation documents, voter records, and birth and death certificates in case the government asks for them — not an easy task in a country where many records are poorly maintained and not digitized.

On a recent afternoon, Sheikh and her sister were among more than two dozen people in a normally sleepy office in Mumbai sifting through voter rolls going back decades. Some squatted on the floor, others hunched over the papers using phones to illuminate their search. Mumbai has a higher proportion of Muslims than the national average and more-organized efforts toward procuring papers.