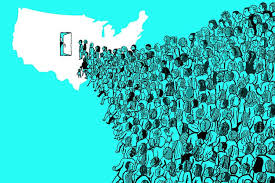 A good example of this double-phenomenon is immigration.

The original immigration intervention was simply a law that prohibited foreign citizens from entering the United States without the official permission of the U.S. government. This law, of course, was contrary to the open-immigration policy under which the United States had been operating for more than 100 years.

Why not give the illegals what they 'demand'?