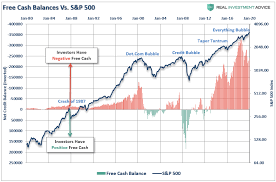 At that time, this idea fell on "deaf ears" as the markets, and economy, were in full swing.

However, it wasn't too long before the 2008 "Financial Crisis" brought the "Minsky Moment" thesis to the forefront. What was revealed, of course, was the dangers of profligacy which resulted in the triggering of a wave of margin calls, a massive selloff in assets to cover debts, and higher default rates.

So, what exactly is a "Minsky Moment?"

Economist Hyman Minsky argued that the economic cycle is driven more by surges in the banking system, and in the supply of credit than by the relationship which is traditionally thought more important, between companies and workers in the labor market.

In other words, during periods of bullish speculation, if they last long enough, the excesses generated by reckless, speculative, activity will eventually lead to a crisis. Of course, the longer the speculation occurs, the more severe the crisis will be.