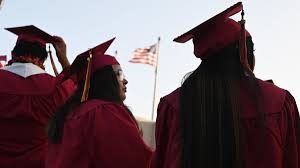 "Over the next few years, the combination of slow repayments and elevated, if no longer growing, levels of new borrowing will likely fuel further increases in outstanding debt," the authors of the report write.

In recent years, the number of students enrolled in higher education has declined and the cost of attending college has stabilized relative to people's incomes, Moody's analysts said. But borrowers have been slow to pay back their debt, meaning student loan balances will keep growing over the years.

Over the past decade, the aggregate annual net student loan repayment rate — meaning the amount of existing balances eliminated each year — has averaged about 3%, according to the Moody's report.

A Virtue of the 14th Amendment

Techrules looks to power everyday EVs and grids with micro-turbines

Chinese rover is the first to investigate the dark side of the moon and finds...