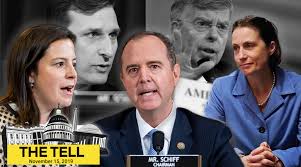 Nothing in my experience has matched the realisation that the current impeachment process against Trump is in effect a Jewish coup against a sitting President.

Sure, I did have the vague idea that it was pretty Jewy but only when I started to dig deeper did I realise that it's a Tribal project from start to finish, top to bottom. Mad-eyed demon-possessed Adam Schiff, Jerry Nadler, Elliot Engel, Nita Lowey and that Congresswoman who held up the Talmud as she announced she was supporting the impeachment are running the project in the House.

Same with the prosecution staff who are lead by one Daniel Sachs Goldman, a name that sounds like a caricature from Der Sturmer. There's hardly a goy on the whole Project Team. Same with the witnesses for the prosecution. Ambassadors Sondberg and Yovanovitch, so-called whistleblower Vindman, that guy from the National Security Council, the Ukraine's President and several of that country's oligarchs...all Jewish.

Jim Jordan tells colleagues 'cancel culture will come for us all'