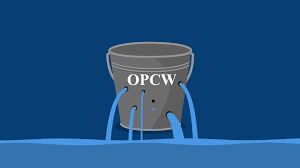 Authored by Caitlin Johnstone via Medium.com,

The Organisation for the Prohibition of Chemical Weapons is now hemorrhaging evidence that the US and its allies deceived the world once again about yet another military intervention, which should be a front-page story all over the world.

Yet if you looked at American news media headlines you'd think the only thing that matters right now is indulging the childish fantasy that Donald Trump might somehow magically be removed from office via supermajority consensus in a majority-Republican Senate.

CounterPunch has published an actual bombshell of a report by journalist Jonathan Steele containing many revelations about the OPCW scandal which were previously unknown to the public. Steele is an award-winning reporter who worked as a senior foreign correspondent for The Guardian back before that outlet was purged of all critical thinkers on western imperialism; he first waded into the OPCW controversy last month with a statement made on the BBC revealing the existence of a second whistleblower on the organisation's investigation into an alleged chemical weapons attack in Douma, Syria.

If you haven't been following this story you can click here for a timeline of events to fully appreciate the significance of these new revelations about the Douma incident, but just to quickly recap, in April of last year reports surfaced that dozens of civilians had been killed in that city by chemical weapons used by the Syrian government under President Bashar al-Assad. This immediately drew skepticism from people who've been paying attention to the narrative manipulation campaign against Syria, since Assad had already won the battle for Douma and had no strategic reason to employ banned weapons there knowing that there would be a military strike in retaliation from western powers. True to form, a few days later the US, France and the UK launched airstrikes on the Syrian government.

The OPCW released its final report on Douma in March of this year, but that report has been contradicted by two separate whistleblowers from the Douma investigation. The first surfaced in May of this year with a leaked Engineering Assessment claiming the chlorine cylinders found at the crime scene were unlikely to have been dropped from the air, and that it was far more likely that they were manually placed there, i.e. staged, by the occupying opposition forces in Douma. The second whistleblower came forward last month with a day-long presentation in Brussels before a panel of experts assembled by the whistleblowing defense group Courage Foundation, the findings of which were published by WikiLeaks.

Chemical weapons watchdog accused by its own inspectors: see https://t.co/RRCu540aJv

Smashing Terrorists in Syria the Only Viable Option

Russia and Turkey: On Opposite Sides of US War in Syria

Russia v. the West, Turkey and Israel on Syria