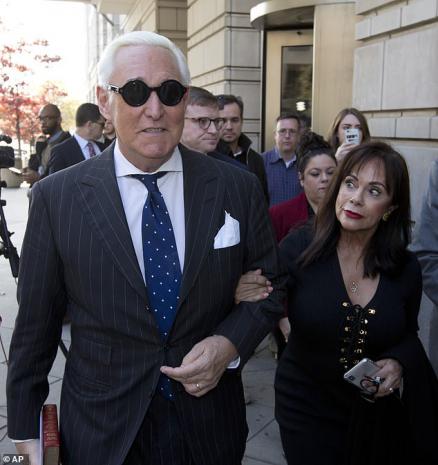 Republican operative Roger Stone was found guilty Friday of all seven counts against him, including witness tampering and making false statements.

Prosecutors portrayed Stone, 67, as a serial liar who tried to bully witnesses into not cooperating with authorities. They charged Stone, a confidant of President Donald Trump, with making false statements, obstruction and witness tampering in a case that was an offshoot of special counsel Robert Mueller's Russia investigation.

Stone is the sixth Trump aide or adviser to be convicted of charges brought as part of Mueller's probe.

His sentencing was set for Feb. 6, and he faces up to 20 years in prison. The jury deliberated for two days.

Trump tweeted shortly after the verdict was announced, asking "what about" Hillary Clinton, James Comey, House Intelligence Committee Chair Adam Schiff and others. "Didn't they lie?"

So they now convict Roger Stone of lying and want to jail him for many years to come. Well, what about Crooked Hillary, Comey, Strzok, Page, McCabe, Brennan, Clapper, Shifty Schiff, Ohr & Nellie, Steele & all of the others, including even Mueller himself? Didn't they lie?....