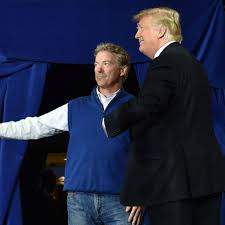 Senator Rand Paul argued Sunday that President Trump is within his rights to to withhold aid from any country that he believes corruption is taking place in, and that charges of quid pro quo against the White House are misplaced.

Transcripts from the House impeachment inquiry have revealed that several administration officials believe Trump tied military aid for Ukraine to the nation opening investigations into Joe Biden and the 2016 election.

"I think we've gotten lost in this whole idea of quid pro quo," Paul said on NBC's "Meet The Press".

"If you're not allowed to give aid to people who are corrupt, there's always contingencies on aid." Paul continued.

"Even President Obama withheld aid, you know, he was supposed to give lethal aid. Congress said, 'Give them $300 billion in lethal aid,' and he sent them blankets." Paul said.

"Presidents since the beginning of time have resisted Congress and there's been this sort of back and forth jockeying over what is sent. But also, presidents have withheld aid before for corruption. I think it's a mistake to say, 'Oh, he withheld aid until he got what he wanted.'" The Senator added.