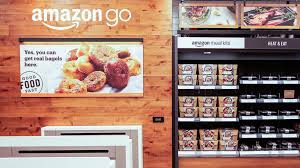 Amazon on Monday said it plans to open its first new brand of grocery store in California next year, as it amps up its ambitious push to become a bigger name in food.

"Amazon is opening a grocery store in Woodland Hills in 2020," an Amazon spokesperson confirmed to CNET on Monday morning, soon after the company published four new jobs postings for the location. Woodland Hills is a neighborhood in Los Angeles.

The store will be different from Whole Foods, Amazon said. It didn't say whether it will open more of these locations, what its selection or pricing will be, or what the brand name is. But in the jobs postings, the company described the Woodland Hills location as "Amazon's first grocery store," suggesting that it will have the Amazon brand name and that the company could expand to multiple sites.

The store won't use the company's Amazon Go technology, which allows customers to check out without waiting in line. Instead, checkout will be conventional as at other grocery stores, the company said.

In addition to Whole Foods, which it bought for $13.2 billion in 2017, Amazon offers grocery delivery through Amazon Fresh, the main Amazon website and Prime Now, as well as food at Amazon Go.

The Wall Street Journal in March wrote about the existence of Amazon's new grocery store format, which the company hadn't confirmed until Monday. Last month, the publication said Amazon was already working on additional stores in Los Angeles, Chicago and Philadelphia.

The new store, though with only one confirmed location so far, points to Amazon's growing ambition in the roughly $800 billion US grocery market, where rival Walmart is the leader and Amazon, even after its Whole Foods deal, remains a small player. Expanding in the grocery sector helps Amazon in a number of ways: It reinforces customer loyalty because people tend to shop at a local store every week and it could allow the company to continue its fast revenue growth, which typically hovers around 20% every quarter despite its massive size.

Additionally, the new line could let Amazon move into the more mainstream grocery store business, while maintaining Whole Foods as a higher-end store for organic and specialty foods. This work could offer new competition to Kroger, SuperValu and many other supermarket chains.