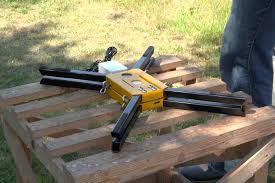 The base itself is a weatherproof device that sits underneath an existing hive. It proceeds to continuously monitor the weight of the hive, along with its internal temperature and its bee-noise levels (the latter two are measured via hardwired sensors that run from the base and into the hive).

Every 15 minutes, the base powers itself up and wirelessly transmits its stored data for two seconds – in this way, it can reportedly run for over a year on just two AA batteries. Users receive the data via the LoRa (Long Range) protocol on their smartphone or computer, where it's displayed on an app.

The app can be set to provide alerts in the event that hive parameters change significantly. A drop in hive weight, for instance, could indicate that the colony has swarmed, the hive has fallen over, or honey production has decreased. A drop in temperature, on the other hand, may indicate that the brood cycle has been interrupted and the queen has stopped laying eggs, while a drop in noise levels indicates decreased activity overall – possibly due to disease.

Should you be interested, the BEEP base is currently the subject of a Kickstarter campaign. A pledge of €299 (about US$326) will get you a complete setup, when and if it reaches production.