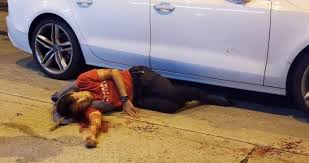 But in an especially violent and gruesome attack, Jimmy Sham Tsz-kit, the leader of one of Hong Kong's biggest organizers of non-violent demonstrators was brutalized early Thursday by a group of thugs. The attackers reportedly used hammers and wrenches to beat Sham - who was photographed lying in a pool of his own blood on Arran Street in Mong Kak at around 7:40 pm Hong Kong time.

It was the second attack on Sham in two months.

Sham was the leader of Civil Human Rights Front, one of the larger groups that has emerged to organize non-violent pro-democracy demonstrations. The organization told the press that Sham was conscious and in stable condition when he arrived at the hospital. Police said he was bleeding from his head and arms when officers found him.

The suspects were described as "four non-ethnic Chinese assailants". They reportedly fled in a getaway car. Officers are looking for the car and the attackers, but so far, no suspects have been apprehended. A witness to the crime reportedly said bystanders tried to intervene, but the attackers threatened them with knives.

The Human Rights Front condemned the attack, saying it would feed fears of a "white terror" in Hong Kong (which was probably the intention).