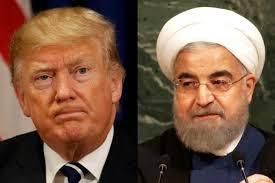 Two and a half months later, on July 22, 2018, Secretary of State Mike Pompeo delivered a speech to a group of Iranian expatriates at the Ronald Reagan Presidential Library, in Simi Valley, California. "[T]he United States," Pompeo said, "is undertaking a diplomatic and financial pressure campaign to cut off the funds that the regime uses to enrich itself and support death and destruction." The crowd launched into generous applause, after which Pompeo delivered his main point. "We have an obligation to put maximum pressure on the regime's ability to generate and move money, and we will do so."

The Trump administration, Pompeo stated, would reimpose sanctions on Iran's banking and energy sectors. "[O]ur focus," he concluded, "is to work with countries importing Iranian crude oil to get imports as close to zero as possible by Nov. 4, [2018]. Zero."