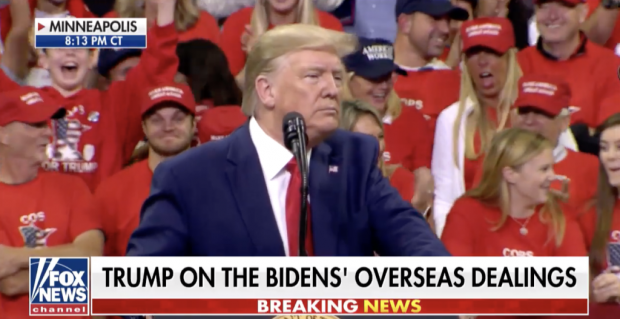 President Trump pulled off an electric rally late last night in Minneapolis, Minnesota. He took the opportunity to speak directly about the Bidens. Trump starts off saying Joe Biden was "only a good Vice President because he understood how to kiss Barack Obama's a**."

He addressed critics who are "angry" that "President Trump made a totally unsubstantiated claim about Hunter Biden and his father," said Trump. "It's not unsubstantiated you crooked son of a guns, it's 100% true."

Hunter Biden goes to China on Air Force 2 with his father, the Vice President at the time, and walks away with 1.5 billion dollars. "So China gives his son 1.5 billion, how would you like to have Joe Biden take over negotiations right now with China? I don't think so. I don't think so."

Trump continued: "Meanwhile Biden allowed China to rip off America for eight years as Vice President and Barack Obama let them just rob us blind and we're not doing that anymore. Those day are over. the Bidens got rich and that is substantiated, while Americans got robbed. that's what happened. sleepy Joe sold out America."