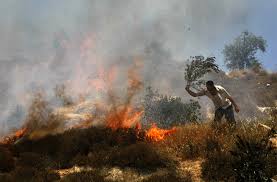 At least 70 olive trees were torched near the occupied city of Nablus as harvesting season begins, according to Palestinian Authority's official news agency Wafa.

Ghassan Daghlas, an official who monitors settlement construction in the northern West Bank, said settlers set fire to olive groves located between the towns of Burin and Huwwara.

For many Palestinians in rural areas they have little alternative to olive farming.

More than 600,000 Israeli Jews live in settlements in the occupied West Bank and East Jerusalem, in constructions considered illegal under international law.