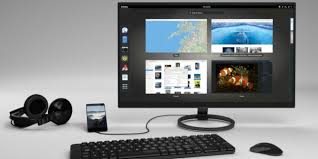 The Purism Librem 5 phone has been a long time coming and the device's impact can already be felt on the Linux desktop.

This effect is most noticeable if you use the GNOME desktop environment, found on the default versions of Ubuntu or Fedora. GNOME is also the interface that ships on laptops from Purism, System76, and Dell. Here are five ways you may have been touched by Purism's device. GNOME 3's designers wanted to create an interface that was usable on touchscreens. The Activities Overview and app windows are meant for fingers as much as mouse cursors. It has always been part of the vision for apps to adjust across various form factors, but there hasn't yet been a small touchscreen device that comes with GNOME.

The Librem 5 runs largely the same version of GNOME that comes on a Purism laptop. To make this work, Purism's team and upstream developers have worked to make various GNOME apps work on a display smaller than six inches.

The most prominent example is GNOME Web, the project's default web browser. If you install the latest version of Web on your desktop and shrink the window down, you will see the navigation and menu buttons jump to the bottom of the window. This is how the app looks on a Librem 5.

Apps have started to appear on Flathub that are clearly designed with mobile devices in mind. Take GNOME Authenticator, a two-factor authentication app. It will run on your desktop, but the window defaults to the size of a phone app.