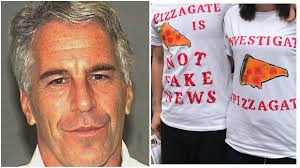 Very much like Ron Unz who discussed the Jeffrey Epstein case on his site on July 29, 2019 in his article, "American Pravda: John McCain, Jeffrey Epstein, and Pizzagate

Our Reigning Political Puppets, Dancing to Invisible Strings," until recently I wasn't paying much attention to the sordid details of the story; I deliberately avoided it. However, it reminded me of the most in-depth presentation of facts that was available years before 2019.

"Elitism is really about people who believe that because they have huge amounts of power, money, and connections, the rules of society that the common man or woman must follow do not apply to them. Jeffrey Epstein was running a well-organized sex trafficking ring that provided underage girls for him and his pedophile friends, many of whom were VIP figures in business and politics with names you would recognize.

Interestingly, while Stone details many of the facts of the case that have again been made public, he provides details of a letter written by R. Alexander Acosta, who was recently forced to resign from the Trump administration due to his role in the leniency towards Epstein, with a footnote referencing a Daily Beast Article written by Conchita Sarnoff entitled, "Behind Pedophile Jeffrey Epstein's Sweetheart Deal." A current version of the article is available via this link which shows the letter as an image. Acosta wrote about the pressure brought to bear, per Stone, and confirmed by the above link:

What followed was a year-long assault on the prosecution and the prosecutors. I use the word assault intentionally, as the defense in this case was more aggressive than any which I, or the prosecutors in my office had previously encountered…

Defense counsel investigated individual prosecutors and their families, looking for personal peccadilloes that may provide a basis for disqualification. Disqualifying a prosecutor is an effective (though rarely used) strategy…

Stone also provided now well known details about the case, but with additional information that isn't making the current rounds. Stone wrote that the Daily Beast quoted Acosta's boss, Bush Attorney General Alberto Gonzales as saying that he "would have instructed the Justice Department to pursue justice without making a political mess," which Stone interprets as meaning that a big political mess would necessarily have occurred in a competent investigation and prosecution because "big names" would have become enmeshed in the scandal since they were the people Epstein was pandering to. He noted that Epstein's "BFF" Wexner was a billionaire Republican donor and he quoted Steven Hoffenberg, former owner of The New York Post, whom Stone interviewed, as saying Epstein "was manipulating currencies for the CIA. His pal Larry Summers hooked him up. He destabilizes Middle Eastern currencies to protect Israel. He's protected." Stone notes this treatment was indicative of the "Clinton-Bush alliance." This information dovetails with recent articles by retired CIA Officer Phil Giraldi for the Unz review, the earliest piece titled "Did Pedophile Jeffrey Epstein Work for Mossad?" in which he noted:

Selective inquiries into wrongdoing to include intense finger pointing are the name of the game in Washington, and the affaire Epstein also has all the hallmarks of a major espionage case, possibly tied to Israel. Unless Epstein is an extremely sick pedophile who enjoys watching films of other men screwing twelve-year-old girls the whole filming procedure smacks of a sophisticated intelligence service compiling material to blackmail prominent politicians and other public figures. Those blackmailed would undoubtedly in most cases cooperate with the foreign government involved to avoid a major scandal. It is called recruiting "agents of influence." That is how intelligence agencies work and it is what they do.

That Epstein was perceived as being intelligence-linked was made clear in Acosta's comments when being cleared by the Trump transition team. He was asked "Is the Epstein case going to cause a problem [for confirmation hearings]?" … "Acosta had explained, breezily, apparently, that back in the day he'd had just one meeting on the Epstein case. He'd cut the non-prosecution deal with one of Epstein's attorneys because he had 'been told' to back off, that Epstein was above his pay grade. 'I was told Epstein belonged to intelligence and to leave it alone.'"