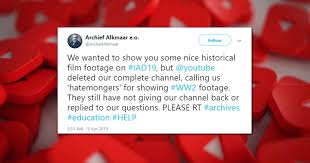 A channel that posted historical archive footage was banned by YouTube for promoting "hate" before being restored after a backlash.

The channel, Regionaal Archief Alkmaar, mainly hosts videos from the 1920s to the 1950s, including footage of the German Army and clips of Adolf Hitler speeches. It is a historical archive and in no way endorses Nazism.

"We wanted to show you some nice historical film footage on #IAD19, but @youtube deleted our complete channel, calling us 'hatemongers' for showing #WW2 footage. They still have not giving our channel back or replied to our questions," the channel owner tweeted.

Following YouTube's announcement that it would be deleting content that promotes Nazism and white supremacy, multiple teachers complained that their educational videos about the Nazi era and Hitler had been removed.

Deleting evidence of the horrors of Nazism to own the Nazis. Brilliant, YouTube, just brilliant.