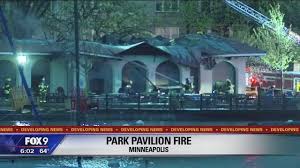 Now, due to continuing refugee placements as well as chain migration there are an estimated 80,000 Somalis living in the Twin Cities metro area, or more like 79,000 if you subtract those who've left the country to join terrorist organizations like ISIS.

Anyhoo, here's a week Minneapolitans had with their Somali neighbors last month:

On Wednesday, May 15th a couple of University students were attacked on campus at the East Bank Train station by two Somali thugs. It was an attempted robbery that the guys rebuffed sustaining injuries that required a hospital visit.

On Thursday, May 16th two Somalis burned down the pavilion at Lake Calhoun [or Lake Bde Maka Ska if you're a virtue signaler) an eating and hanging out meeting place in the heart of the city enjoyed by generations of Americans around the prettiest city lake you've ever seen. This is in the most expensive neighborhood in Minneapolis.