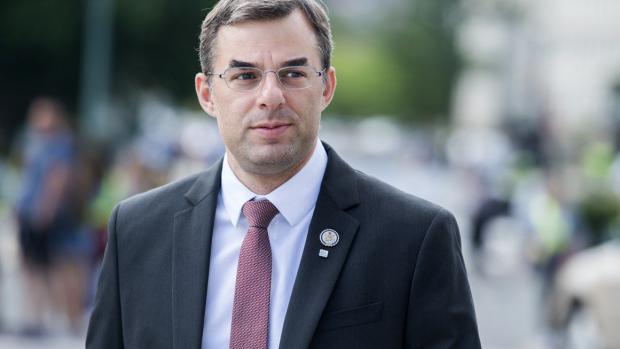 The most absurd attack against the Michigan congressman involves ignoring his entire history in office.

The first time the libertarian-leaning Rep. Justin Amash (R–Mich.) got attention here at Reason was when he was first running for Congress in 2010. Amash was then serving in the state legislature, and Katherine Mangu-Ward took note of his record of explaining each of his votes on Facebook. He continued that practive after he took his seat in Washington, particularly on what might be seen as "controversial" votes or votes where he bucked the majority.

Amash's generally fearless transparency has made it easy for voters to track his libertarian record. It also helps explain why his Twitter-thread ruminations that President Donald Trump should potentially face impeachment hearings are so detailed and thorough.

Because Amash has been so transparent, we also know how thorough he has been in fighting for Americans' right to be protected from unwarranted federal surveillance, and how this has put him at odds with intelligence officers, with the leaders of both major political parties, and with both Barack Obama's and Donald Trump's administrations.

Bizarrely, some who are upset that Amash won't support Trump are now attempting to attack him for being weak on surveillance issues. This is absolutely baffling for anybody who knows that Amash has regularly tried to use his position as a lawmaker to scale back the government's powers in both the PATRIOT Act and the Foreign Intelligence Surveillance Act Amendments (FISA) to secretly snoop on American citizens.

At Amash's town hall on Monday, one upset woman identified herself as a former Amash volunteer, claimed to have voted for him in every election since 2010, and said she'd recently changed her position on him. She was obviously very upset at Amash for his position on impeaching Trump. After expressing her anger for a few minutes, she asked him, "Why did you say nothing about the FISA abuses? If you care about the constitution so much, why didn't you say anything about the yearlong violation of the Fourth Amendment rights of Trump and his entire transition team?" This apparently prompted Amash to laugh off-camera, and that made her even angrier, because she took it to mean that he doesn't care about the issue. She then insisted that he "didn't speak about it once."