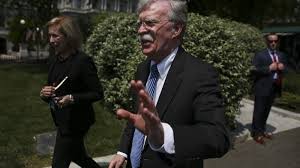 The Trump administration is sending more troops and weapons to the Middle East amidst rising tensions with Iran.

"We are going to be sending a relatively small number of troops, mostly protective," President Donald Trump said to reporters at the White House, according to the Associated Press. "Some very talented people are going to the Middle East right now and we'll see what happens."

The Trump administration also announced today that heightened tensions with Iran constitute a national emergency, thus allowing the administration to approve $8 billion in weapons sales to Saudi Arabia without authorization from Congress.

These moves come after White House officials spent weeks deliberately raising tensions with Iran. Last week, it was reported that Defense Department officials—at the urging of ultra-hawkish National Security Advisor John Bolton—were revising contingency plans to send 120,000 troops to the Middle East in the event Iran attacked U.S. troops in the region or ramped up its nuclear program.

Before that, Bolton, who's long advocated for war with Iran, announced that a U.S. carrier, the Abraham Lincoln, would be heading to the Persian Gulf ahead of schedule to counter a supposed, unspecified heightened danger from Iran.

The aggressive moves taken by the Trump administration provoked condemnation from across the political spectrum.

Sen. Bernie Sanders (I–Vt.) and Rep. Tulsi Gabbard (D–Hawaii) both issued statements on social media warning of the consequences of any war with Iran.