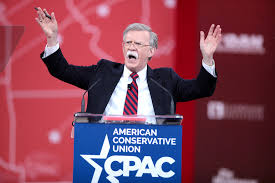 The New York Times on Tuesday played its accustomed role in stoking the fires, front-paging a report that, at Bolton's request, Acting Defense Secretary Patrick Shanahan has come up with an updated plan to send as many as 120,000 troops to the Middle East, should Iran attack American forces or accelerate work on nuclear weapons. The Times headline writer, at least, thought it appropriate to point to echoes from the past: "White House Reviews Military Plans Against Iran, in Echoes of Iraq War."

By midday, Trump had denied the Times report, branding it "fake news." Keep them guessing, seems to be the name of the game.

Following the Iraq playbook, Bolton and Pompeo are conjuring up dubious intelligence from Israel to "justify" attacking – this time – Iran. (For belligerent Bolton, this was entirely predictable.) All this is clear.

What is not clear, to Americans and foreigners alike, is why Trump would allow Bolton and Pompeo to use the same specious charges – terrorism and nuclear weapons – to provoke war with a country that poses just as much strategic threat to the U.S. as Iraq did – that is to say, none. The corporate media, with a two-decade memory-loss and a distinct pro-Israel bias, offers little help toward understanding.