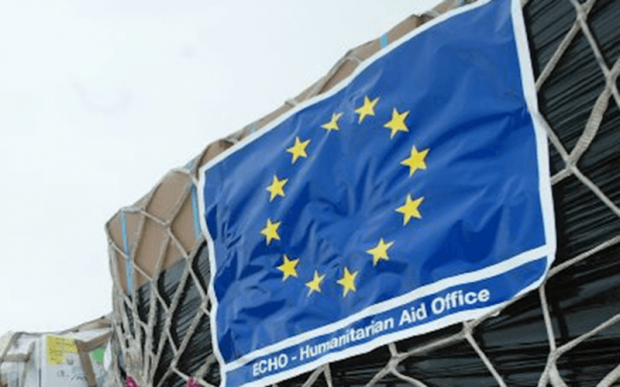 Brexiteers in Britain are denouncing the EU as an all-powerful behemoth from whose clutches Britain must escape, just as the organisation is demonstrating its failure to become more than a second-rate world power.

The EU's real status – well behind the US, Russia and China – has just been demonstrated by its inability to protect Iran from US sanctions following President Trump's withdrawal from the Iran nuclear deal of 2015. A year ago, Angela Merkel and Emmanuel Macron made humiliating visits to Washington to plead vainly with Trump to stay with the agreement, but were rebuffed.

Since then the US has successfully ratcheted up economic pressure on Iran, reducing its oil exports from 2.8 to 1.3 million barrels a day. The UK, France and Germany had promised to create a financial vehicle to circumvent US sanctions, but their efforts have been symbolic. Commercial enterprises are, in any case, too frightened of the ire of the US treasury to take advantage of such measures.

Iranian president Hassan Rouhani said on Wednesday that Iran would stop complying with parts of the nuclear deal unless the Europeans provided the promised protection for the oil trade and banks. Everybody admits that Iran is in compliance but this is not going to do it any good.

These are the latest moves in the complex political chess game between the US and Iran which has been going on since the overthrow of the Shah in 1979. It is this conflict – and not the US-China confrontation over trade, which has just dramatically escalated – which will most likely define any new balance of power in the world established during the Trump era. It is so important because – unlike the US-China dispute – the options include the realistic possibility of regime change and war.

The Europeans have proved to be marginal players when it comes to the Iran deal and it was never likely that they would spend much more diplomatic capital defending it once the US had withdrawn. In the long term, they also want regime change in Tehran, though they oppose Trump's methods of obtaining it as reckless. Nevertheless, the contemptuous ease with which Trump capsized the agreement shows how little he cares what EU leaders say or do.

The Europeans will be spectators in the escalating US-Iran conflict. The US potential is great when it comes to throttling the Iranian economy. Iranian oil exports are disappearing, inflation is at 40 per cent and the IMF predicts a 6 per cent contraction in the economy as a whole. The US can punish banks dealing with Iran everywhere, including countries where Iran is politically strong such as Iraq and Lebanon.

Tehran does not have many effective economic countermeasures against the US assault, other than to try to out-wait the Trump era. Caution has worked well for Iran in the past. After 2003, Iranians used to joke that God must be on their side because why else would the US have overthrown Iran's two deeply hostile neighbours – the Taliban in Afghanistan and Saddam Hussein in Iraq.

Many Iranian leaders appear confident that they can survive anything Trump can throw at them other than a full-scale shooting war. Past precedent suggests they're right: in the wars in Lebanon after the Israeli invasion of 1982, Iran came out on top and helped created Hezbollah as the single most powerful political and military force in the country. Likewise, after the US/UK invasion of Iraq in 2003, Iran undermined their occupation and saw a Shia-led government sympathetic to its interests hold power in Baghdad. In Syria after 2011, Iranian support was crucial in keeping its ally Bashar al-Assad in control.

Dawn of vaccine passports. Americans set to learn on Wednesday if they will be allowed to fly...