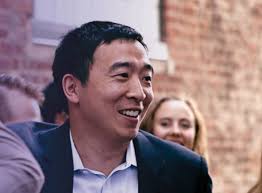 His policies include renovating abandoned malls as new public spaces, limiting smartphone use among children, reviving earmarks in the legislative process, making community college affordable and paying Americans who are moving to new areas for jobs. With his new, cutting-edge brand of politics, Yang could be the perfect antidote to our toxic status quo which feeds on cynicism, contempt, tribalism and above all dysfunction.

Yang's overarching message of positivity, compassion and concrete policy making would be a welcome disruption to Washington's refusal to address the nation's gripping challenges regarding healthcare, education and climate change. In other words, Yang combines the best aspects of personality with policy chops, a valuable mix for a presidential contender.

Yang has weighed in on all sorts of topics one would not expect to hear from a conventional candidate, from free marriage counseling to free HBO accounts to rally the country around Game of Thrones. Then again, Mr. Yang is not conventional at all. As an entrepreneur, Yang created over 2,500 jobs in American cities suffering from the 2008 financial crisis. He then realized that the existential threat fueling poverty and wealth inequality was automation, a problem which job creation on its own could not handle. He subsequently built his political campaign on a central message: universal basic income. That means $1,000 per month for every American adult. Period.