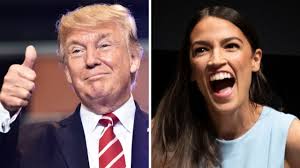 The politics in Washington, D.C. can lead to some strange alliances.

In a deep time of partisan deadlock, two of the most important members form opposite parties are holding back blows on one another to agree. President Donald Trump and Rep. Alexandria Ocasio-Cortez have both expressed support for each other in recent days.

Ocasio-Cortez has written a letter praising Trump's leadership in the Middle East.

In a show of bravado, Trump says Ocasio-Cortez', D-N.Y. is "wonderful" and looks forward to facing her $93 trillion Green New Deal at debates during the 2020 presidential election.

At a dinner for the National Republican Congressional Committee, Trump said of the Green New Deal: "Don't kill it, because we'd like to be able to run against it," according to The Daily Caller.

While conservative pundits and much of the GOP want to squash the radical left's ideas, Trump says it's a winning idea to run against for the Republicans.

He's projecting a showdown over the bill — and thinks it'll lead to his re-election.

In other words, he thinks the outcome would bode well for him.

And because the policy is so bad, he and the fellow Republicans would run roughshod over it.

"If they beat me with the Green New Deal, I deserve to lose."

The commander-in-chief likely took a cue from the results of the Green New Deal in the Senate. No one — not even the Democrats who helped co-write the bill — could bring themselves to vote for such the legislation.