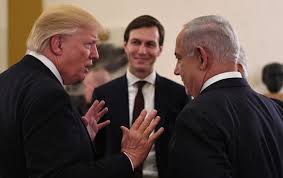 Last week, he trampled all over its remaining tattered pages. He did so, of course, via Twitter.

Referring to a large piece of territory Israel seized from Syria in 1967, Trump wrote: "After 52 years it is time for the United States to fully recognize Israel's Sovereignty over the Golan Heights, which is of critical strategic and security importance to the State of Israel and Regional Stability."

Israel expelled 130,000 Syrians from the Golan Heights in 1967, under cover of the Six Day War, and then annexed the territory 14 years later – in violation of international law. A small population of Syrian Druze are the only survivors of that ethnic cleansing operation.

Replicating its illegal acts in the occupied Palestinian territories, Israel immediately moved Jewish settlers and businesses into the Golan.

Until now, no country had recognized Israel's act of plunder. In 1981, UN member states, including the US, declared Israeli efforts to change the Golan's status "null and void".

But in recent months, Israeli prime minister Benjamin Netanyahu began stepping up efforts to smash that long-standing consensus and win over the world's only superpower to his side.