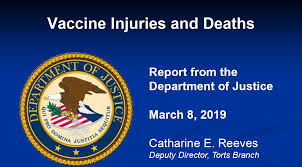 The federal government Advisory Commission on Childhood Vaccines (ACCV) under the U.S. Department of Health and Human Services just concluded their first meeting of 2019 on March 8th.

These quarterly meetings include a report from the Department of Justice (DOJ) on cases settled for vaccine injuries and deaths as mandated by the National Vaccine Injury Compensation Program (NVICP).

The NVICP was started as a result of a law passed in 1986 that gave pharmaceutical companies total legal immunity from being sued due to injuries and deaths resulting from vaccines.

Drug manufacturers in the vaccine market can now create as many new vaccines as they desire, with no risk of being sued if their product causes injury or death.

This has resulted in a huge increase of vaccines entering the market, and the U.S. government, through the Centers for Disease Control (CDC), is the largest purchaser of these vaccines, spending in excess of $5 billion taxpayer dollars each year to purchase these vaccines.

The CDC's annual budget of $5 BILLION to purchase vaccines from pharmaceutical companies with American taxpayer funds, and the NVICP law which gives legal immunity to the pharmaceutical industry for injuries and deaths due to vaccines, are facts that are routinely censored and withheld from the public in the corporate-sponsored "mainstream" media, as well as in government legislative hearings that seek to mandate vaccines by force.

If you or a family member is injured or dies from vaccines, you must sue the federal government and go up against their attorneys in this special vaccine court.

Another Gardasil HPV vaccine victim who suffered cardiac arrest and death, took over 3 years to settle.

As far as we know, Health Impact News is the only media source that publishes these DOJ reports on vaccine injuries and deaths each quarter. Past reports can be found here.