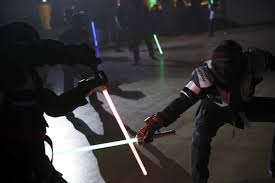 It's now easier than ever in France to act out "Star Wars" fantasies, because its fencing federation has borrowed from a galaxy far, far away and officially recognized lightsaber dueling as a competitive sport, granting the iconic weapon from George Lucas' saga the same status as the foil, epee and sabre, the traditional blades used at the Olympics.

Of course, the LED-lit, rigid polycarbonate lightsaber replicas can't slice a Sith lord in half. But they look and, with the more expensive sabers equipped with a chip in their hilt that emits a throaty electric rumble, even sound remarkably like the silver screen blades that Yoda and other characters wield in the blockbuster movies.

Plenty realistic, at least, for duelists to work up an impressive sweat slashing, feinting and stabbing in organized, 3-minute bouts. The physicality of lightsaber combat is part of why the French Fencing Federation threw its support behind the sport and is now equipping fencing clubs with lightsabers and training would-be lightsaber instructors. Like virtuous Jedi knights, the French federation sees itself as combatting a Dark Side: The sedentary habits of 21st-century life that are sickening ever-growing numbers of adults and kids.