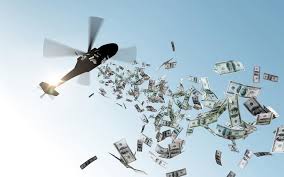 The same old tired, failing inflationist responses are being lined up, despite the evidence that monetary easing has never stopped a credit crisis developing. This article demonstrates why monetary policy is doomed by citing three reasons. There is the empirical evidence of money and credit continuing to grow regardless of interest rate changes, the evidence of Gibson's paradox, and widespread ignorance in macroeconomic circles of the role of time preference.

The Fed's rowing back on monetary tightening has rescued the world economy from the next credit crisis, or at least that's the bullish message being churned out by brokers' analysts and the media hacks that feed off them. It brings to mind Dr Johnson's cynical observation about an acquaintance's second marriage being the triumph of hope over experience.

The inflationists insist that more inflation is the cure for all economic ills. In this case, mounting concerns over the ending of the growth phase of the credit cycle is the recurring ill being addressed, so repetitive an event that instead of Dr Johnson's aphorism, it calls for one that encompasses the madness of central bankers repeating the same policies every credit crisis. But if you are given just one tool to solve a nation's economic problems, in this case the authority to regulate the nation's money, you probably end up believing in its efficacy to the exclusion of all else.