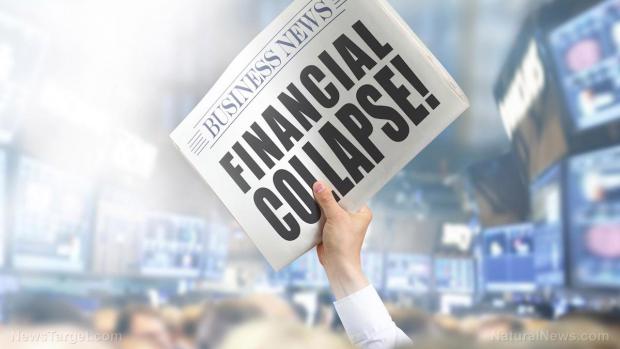 (Natural News) After U.S. markets peaked in September nearly two years after Donald Trump's victory came with the promise (and delivery) of pro-growth policies, investors got a scare in December when several factors combined with interest rate hikes by the Federal Reserve to drive down indexes.

The Dow Jones, Nasdaq, and the S&P 500 all finished the year lower than they were in September. Worse, there are predictions that 2019 could hit markets harder.

Bank of America just polled 234 panelists who manage more than $645 billion in investments where they think global growth is heading over the next 12 months, and 60 percent said it will be negative.

On top of this potential nightmare scenario is the fact that governments around the world comprising the largest economies have nearly all become debtor nations that are one economic calamity away from global collapse.

As noted by Robert Gore at The Burning Platform blog, France's Yellow Vest protesters may have inadvertently hit upon a way to bring about the collapse of the fiat money and debt system that is sustaining the very governments which increasingly suppress the people they are supposed to serve.

Gore notes that in recent days the French protesters — whom, you recall, took to the streets in response to a massive gasoline tax pushed by President Emmanuel Macron to fund France's contributions to combat "global warming" agreed to at the Paris Accords in 2015 — have advocated a run on the country's banks. Such a run, if it occurs, could actually start a chain reaction that would spread to other ostensibly wealthy countries including the United States.

The Election Has Already Been Hijacked and the Winner Decided: 'We the People' Lose

This Is ALL A LIE! - The Global Chinese Takeover EXPOSED!

This is Next Level with OG G. Edward Griffin

Why Canada Is Helping China to Defeat the United States

Vergennes, Vermont - The Tip of the Spear in Fight for Freedom and Self-determination.

A Nation at War by Usarmyretiredsgm

Doug Casey on the Dangers of Global Regulation

The Rockefeller UN Global Takeover Is Upon Us