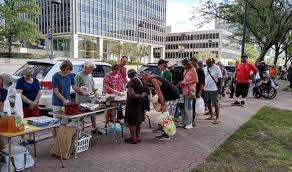 Kansas City, Missouri Health Department made a national splash when their staff literally poured bleach on food intended for homeless people earlier this month. A coalition of friends called Free Hot Soup (FHS) Kansas City had formed picnic-style food gatherings to provide hot meals for homeless people, and all went according to plan until officials trashed the food and doused it in bleach to render it inedible.

"It looked ugly Sunday," the Star reported last week. "Home-cooked chili, stacks of foil-wrapped sandwiches, vats of soup and other food prepared by volunteers with Free Hot Soup Kansas City were dumped in bags and soaked in bleach to make sure no one went back to try to recover it."

–"Everybody was ready to stand up for themselves," Nellie McCool, a volunteer with Free Hot Soup Kansas City, told the Star. "We're prepared to face the law."

Free Hot Soup has even stripped the gathering point addresses from its group listings perhaps to keep local government from ambushing them again.

Surprisingly, all ends of the political spectrum were unified in an outcry against this affront on rights and helping others.

"You wouldn't think you'd go to jail over medical bills"...