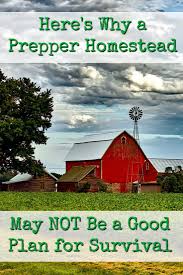 Lots of preppers are convinced that they're going to "live off the land" should the world as we know it come tumbling down around our ears. Seed banks are stockpiled, books are purchased, and people are confident that they'll be able to outlive everyone else based on the sweat of their inexperienced brows.

But this may not be the best of ideas for some folks.

If you've been at it for a while, having a homestead can be a wonderful survival plan and a rewarding lifestyle. But if you think you're going to go straight from the city to live off the land, you're in for a horrible – and potentially fatal –  surprise.

A prepper homestead is something that must be built over a period of time – it's absolutely not a plug-and-play solution, regardless of the number of survival seed packets you have carefully stashed away. Homesteading for survival is not a good plan if you have never done it before. No matter how hardworking you are, homesteading takes time. Time for learning, time for mistakes, and time for your plans to come to fruition.

When you do eat a meal in which all the ingredients were produced by you, on your own land, it will be the most delicious, gratifying meal you've ever eaten. But it's a long road to get there.

A prepper homestead isn't as easy as you may think.

If a prepper homestead is your survival plan, let me give you some advice: STORE. FOOD.

You are going to have to have something to get you through that first year when your farm doesn't produce diddly squat.

As anyone who has followed this blog for a while knows, my family is prone to new adventures. We've moved from a large city to a cabin in the North Woods, where I discovered I knew nothing about building fires and living in the wilderness. We drove across the continent to move from Ontario, Canada, to the West Coast, where I had to rebuild my preps from the ground up since US Customs would not allow us to bring our food supplies across.

Another year, our adventure was food production. My daughter and I moved to a small farm, eager to polish up a new skill set and build that idealized prepper homestead that many of us dream about.

After only a few months there, I realized it was my duty to announce that while raising your own food is a noble goal, it's not as easy as people seem to think. It was way harder and more time-consuming than I expected.

Of course, shortcuts do exist to help you circumvent all of these issues. If you have lots of money, you can shorten the amount of time it takes for your farm to be productive. The shortcuts all seem to cost a lot more money than the hard-work-method, and if you're getting into self-reliance on a dime, they may not be practical or affordable. The other issue is, you may not even know the issue exists until it smacks you in the face and you're chasing a goat down the road in your pajamas, frantically waving your arms to warn approaching pickup trucks to slow down so they don't mow down your livestock. (Ask me how I know this.)

The real truth is, raising your own food takes time, experience, and skill. It isn't something you undertake after the SHTF. If a self-reliant homestead is your survival strategy, you need to start now.

Unless you're Jack, the possessor of magic beans that grow to prolific heights overnight, you're going to get awfully hungry waiting for your garden to feed you. The first year a garden is grown in a new place, you learn about all sorts of foibles of your location, things you'd never know unless you have taken the effort to create your own salad bar.

Some folks get lucky and end up with a lush green jungle from the very first season, but for most of us…well, let's just say that my daughter and I would struggle to live for a week on the calories produced by that first year's garden.

We had all of the plagues this year that condemned us to gardening failure. First, we moved late in the season, but I had nurtured my veggies in buckets, so I assumed I'd transplant them and they'd magically grow.

Alas, on the first night, they fattened up the local deer. If I shot a deer that got fed by my vegetable plants, would that count towards the success of my gardening efforts? Because that would substantially up the caloric bounty.

So, I re-fenced, got a big dog, and replanted. Then, like something out of a sci-fi movie, freaking GOPHERS yanked the plants down by the roots and made them vanish. All that remained was a fluttering leaf here and there.

I dug out my raised beds, laid hardware cloth at the bottom, and refilled them. Then I replanted again. By this time, it was late July and we had a heatwave. Many of the new plants didn't survive the blazing 110 degree days, despite shadecloth and plentiful water. Some of the ones that did survive got peed on by the dog I got to protect them from the deer and immediately withered from being drenched in urine.

Did I mention hornworms? They decimated several of my tomatoes and peppers overnight. OVERNIGHT! I watered in the evening and things looked great. The next morning, half of my plants looked as though they'd been scalped. Out of a sense of vengeance, I threw those hornworms in the chicken run to be pecked, tortured, and eaten alive. Take that, you evil little jerks.

That year, all I got was tomatoes and peppers from the plants I saved. Thankfully, we're big fans of salsa and marinara, but we did not have enough to live off. In four months on my little prepper homestead, I basically produced a large salad.

This is all part of the game, though.

Next year was better because I put into place what I've learned. I got a deer-proof fence, I gopher-proofed my raised beds, I figured out how to keep my dog out of the lower beds by placing barriers at the corners after he peed on my favorite tomato plant. Once I harvested the last tomato, I got a cover crop ready to go into the beds to enrich the soil and feed my chickens over the winter. And to greater express my determination, I enrolled in a master gardener's course through my county extension office, where I learned a lot that was specific to my area and climate.

I did successfully grow food the second year. But not enough to feed us for an entire year. And if we'd had to live off of that first year's harvest, we'd have died of starvation in a month or so.

Also, those seed banks you've stashed away? They're probably not going to feed your family on a long-term basis. Here's what a lifelong farmer had to say about them.

As I mentioned above, shortcuts are expensive and all of these may not be realistic or fall within your budget.

Start out protecting your garden from all possible foragers by building a deer-proof, gopher-proof area before you ever plant a seed.

Test your soil and amend it with stuff from the nursery to provide the perfect growing medium for your veggies. (Add these kits to your stockpile so that you can test your soil regularly throughout the season.)
Take a class from locals, geared towards your environment.

Pay a master gardener to help you get your garden established.

The best (and most expensive) shortcut? Move to a place with existing fruit trees, established gardens, and permaculture fixtures.

Which came first, the chicken or the egg?

In farming, it's the chicken. The chickens come well, well, before the eggs. Like, at least 6 months before.

There's a lot more to backyard egg production than throwing some feed into a henhouse or opening the door to let your birds free-range and telling them to be sure and deposit their eggs neatly in the bins provided to them.

First, many people start with little baby chicks. Not only are they flippin' adorable, but they're way cheaper than adult birds. You get to know exactly what they've eaten for their entire lives, which means you know whether they've been consuming antibiotics or hormones, and can alter their diets to fit your personal food philosophies.

But chicks are fragile. Out of my first batch of 8, five died.  FIVE. More than 50%. I felt like an unwilling serial killer of baby animals. Since my subsequent batches have flourished with the exact same care, I suspect there was some illness from the feed store where I purchased them. Baby chicks need special food, an environment that is safe from predators, and a heat source so that they can maintain the right body temperature. Of course, you have to be careful with the heat lamp or you can set your coop on fire, something that very nearly happened to me, but mercifully, we caught it just in time.

When they get big enough, you have to teach them where the water is and put them in a safe place where they won't be eaten by predators. We have raised chickens in a large covered run that keeps them protected while allowing them fresh air and some freedom and we have free-ranged them. Free-ranging is less work and costs a bit less, but it has more risk. Free range hens often enjoy laying eggs in places other than their nesting boxes, too.

Keep in mind that when it's too cold or too hot, your chickens won't lay eggs. If there is a predator sniffing around the coop at night, they won't lay eggs. When they molt, they will lay fewer eggs. Hens of laying age are actually no guarantee of fresh eggs on a daily basis.

Have a predator-proof coop built for you by someone who has raised chickens.  You'll need a floor that nothing can dig under, good door latches, a sturdy top, shade, nesting boxes, and roosts.

Install an automatic waterer that refills when it gets too low.