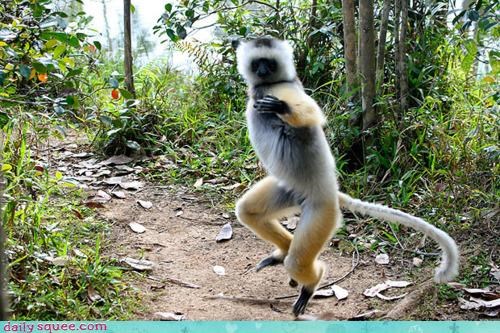 Every single bird and mammal I can think of, even some reptiles and fish, will exhibit something that ethologists call "threat display" whenever it feels menaced. Dogs and cats, horses and cattle, geese and pigs all engage in what amounts to a form of violence reducing behavior, growling, snarling, puffing up with poison spines, spitting, and assuming various combative postures that tell an enemy, a rival, or a predator, "Better back off, or you're gonna get hurt." I even had a cuddly big pet rabbit once, who would snort, bare his teeth, and charge you with his big front claws if he didn't like the cut of your jib.

Animals, especially predators, are all pretty good at risk assessment. I'm absolutely certain, as an enthusiastic student of evolution, that dinosaurs had different kinds of threat display mechanisms, too. Maybe even trilobites. They do their thing and they stay alive.

On the other hand, just suppose you're walking down a badly-lit sidewalk in any town or city in this or practically any other country, when you're suddenly approached by half a dozen tough-looking young punks. They could be a murderous gang of thugs out to "make their bones" or just the local hockey team. But if you pull out your 6 1/2 inch nickel-plated Smith & Wesson Model 29 .44 Magnum, and simply hold it down beside your leg, you could be arrested for "brandishing" and your attractive, shiny, valuable weapon stolen from you by sticky-fingered cops.

When it comes to threat display -- which could save your life as well as the lives of those who make you feel uneasy -- you don't have the rights of a lowly blow-fish.The insanity of ignorant government pencil-necks forbidding four billion year old violence-reducing behavior cannot be overstated.

I often think about what I'd do if I were in charge of solving the criminal violence problem in Chicago. (No, I'm not changing the subject.) The obvious first step is eliminating any legal barrier -- which caused the trouble in the first place -- to the free exercise of the unalienable individual, civil, Constitutional, and human right of every man, woman, and responsible child to obtain, own, and carry, openly or concealed, any weapon -- rifle, shotgun, handgun, machine-gun, anything -- any time, any place, without asking anyone's permission.

Let me say that again, so that, if you are a "liberal", your worst fears are realized -- I am the author, after all, who first advocated in his writings in the 1970s that everyone carry a concealed weapon; and just look at us now! -- and you'll understand that I am absolutely serious: every man, woman, and responsible child has an unalienable individual, civil, Constitutional, and human right to obtain, own, and carry, openly or concealed, any weapon -- rifle, shotgun, handgun, machine-gun, anything -- any time, any place, without asking anyone's permission. It is the denial of that right that has caused all of Chicago's problems with criminal violence.

The second thing I'd do would be to legalize threat display, as I have discussed it here, saving thousands of lives in the process. Chicago (or whatever other municipality adopted these measures) could become the most peaceful, productive, and pleasant city in America.

Bad things inevitably happen when you systematically deprive people of their rights for decades -- or for centuries. The past couple of years have seen ugly developments that have arisen directly from this unwarranted and unconstitutional restriction on human rights. Vicious masked gangs reminiscent of Hitler's brown-shirts or Mussolini's black-shirts are now allowed by negligent and cowardly city governments and campus administrations to beat up and terrorize people and suppress their freedom of speech while ridiculously calling themselves "anti-fa", or anti-fascist. Saul Alinski would be proud.

Likewise, hysterical, screaming mobs (Mob: "a large crowd of people, especially one that is disorderly and intent on causing trouble or violence. 'a mob of protesters'" -- Google online dictionary) attempted, almost without opposition, to prevent the U.S. Senate's confirmation of Supreme Court nominee Brett Kavanaugh, even trapping their victims in elevators or in their own offices, and shouting -- screaming --down their objections. The most criminally irresponsible specimens in Congress have urged their mind-numbed followers to confront politicians they don't like in restaurants, grocery stores. and on the streets.

We can take a cue from Korean business people in Los Angeles during the 1992 Rodney King riots, a circumstance in which the police were prevented from acting and civilian-held semi-automatic weapons, openly displayed, performed a significant role in keeping the peace and civil order exactly as the Founding Fathers might have prescribed. Certainly the tactics of anti-fa and the anti-Kavanaugh mobs wouldn't have worked with most of the individuals I know.

But then again, to quote Garth Brooks, "I've got friends in low places."

Award-winning novelist and essayist L. Neil Smith is a retired gunsmith, Publisher and Senior Columnist of L. Neil Smith's The Libertarian Enterprise and the author of over thirty books. Look him up on Google, Wikipedia, and Amazon.com. He is available, at professional rates, to write columns, articles, and speeches for your organization, event, or publication, fiercely defending your rights, as he has done since the mid-1960s. His writings (and e-mail address) may also be found at L. Neil Smith's The Libertarian Enterprise, at JPFO.org or at https://www.patreon.com/lneilsmith, to which you can contribute, directly. His many books and those of other pro-gun libertarians may be found (and ordered) at L. Neil Smith's THE LIBERTARIAN ENTERPRISE "Free Radical Book Store" The preceeding essay was originally prepared for and appeared in L. Neil Smith's THE LIBERTARIAN ENTERPRISE. Use it to fight the continuing war against tyranny.