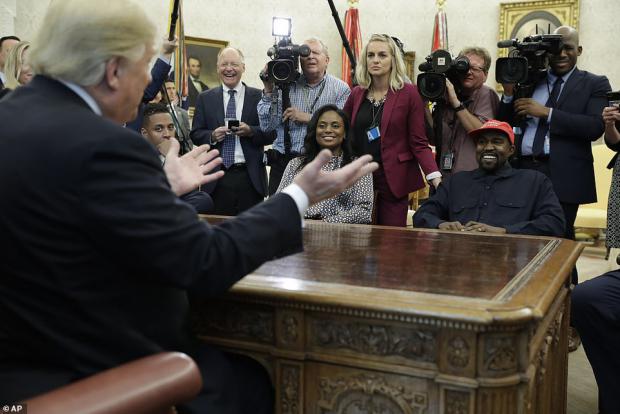 *The rapper lunched with Donald Trump, the president's son-in-law and adviser Jared Kushner and Ivanka

*Also present at the lunch: Jim Brown, the NFL Hall of Fame running back

*Agenda was said to includes'record highs in African American employment, the creation of manufacturing jobs... and the massive violent crime surge in Chicago,' as well as prison reform

*He angered SNL cast members when he went on an unscheduled rant last month at the end of the show about Trump; his latest rant, in the Oval Office, is sure to turn a few more heads

*'They tried to scare me to not wear this hat, my own friends, but this hat it gives me, it gives me power,' West said of the red hat bearing the president's campaign slogan

*'Because why would you keep something around that's a trap door?' he said. 'Would you build a trap door that if you mess up and you accidentally, something happens, you fall and you end up next to the Unabomber?'

Kanye West went on an extended rant in the Oval Office on Thursday at the beginning of a working lunch with Donald Trump, where he dropped the F bomb, talked about his Bipolar Disorder diagnosis, pounded on the Resolute Desk and gave the president a hug.

West said that he has come to understand that 'bravery helps you beat this game called life' and that he was misdiagnosed with a mental health disease when he was really just sleep deprived in a 10-minute speech, followed by nearly 10 minutes of questions, in which he labeled himself a 'crazy motherf***er' and called the amendment that ended slavery a 'trap door' and said it should be abolished.

He also joked about running for president in 2024 and said that Trump 'is on his hero's journey' in the astounding remarks that seemed to amuse the former reality TV show hosting president, who told him: 'That was pretty impressive.'

West showed up to the meeting that the White House opened up to reporters at the last minute wearing a "Make America Great Again" ball cap.

'They tried to scare me to not wear this hat, my own friends, but this hat it gives me, it gives me power,' West asserted. 'You know, my dad and my mom separated, so I didn't have a lot of male energy in my home. And also, I'm married to a family that, you know – not a lot of male energy going on. It's beautiful though,' he said, breaking into nervous laughter as he spoke about his wife Kim Kardashian West and her family.

The rapper said that he loves Hillary Clinton but the slogan 'I'm with her' didn't empower him to be the kind of man or father he felt his son deserved.

'I love Hillary. I love everyone, right? But the campaign "I'm with her" just didn't make me feel, as a guy that didn't get to see my dad all the time, like a guy that could play catch with his son,' he said. 'It was something about, when I put this hat on, it made me feel like Superman. That's my favorite super hero.'

SCROLL DOWN FOR VIDEOS AND A FULL TRANSCRIPT