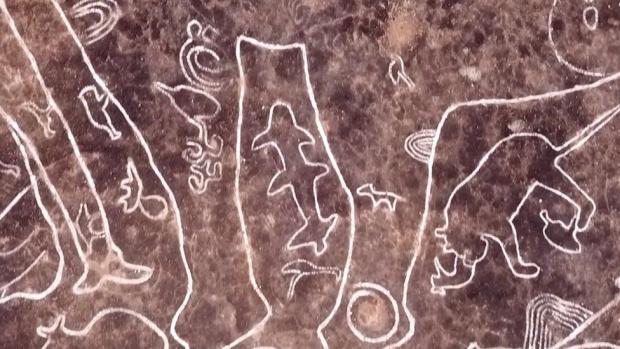 The rock carvings - known as petroglyphs - have been discovered in their thousands atop hillocks in the Konkan region of western Maharashtra.

Mostly discovered in the Ratnagiri and Rajapur areas, a majority of the images etched on the rocky, flat hilltops remained unnoticed for thousands of years.

Most of them were hidden beneath layers of soil and mud. But a few were in the open - these were considered holy and worshipped by locals in some areas.

The sheer variety of the rock carvings have stunned experts - animals, birds, human figures and geometrical designs are all depicted.

The way the petroglyphs have been drawn, and their similarity to those found in other parts of the world, have led experts to believe that they were created in prehistoric times and are possibly among the oldest ever discovered.

"Our first deduction from examining these petroglyphs is that they were created around 10,000BC," the director of the Maharashtra state archaeology department, Tejas Garge, told the BBC.