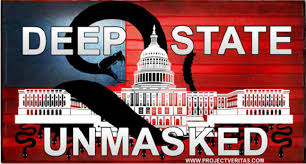 To some, the Deep State is an anonymous, faceless resistance; or as Glenn Greenwald first penned, the entity which "… goes to war with the president-elect, using unverified claims."

To others, it is a vast administrative bureaucracy, unaccountable to anyone; in fact, an "extralegal state within a state."

Some call it part of a conspiracy theory. And, at least one conspirator recently received priceless support for their agenda through the op-ed pages of The New York Times.

But who wrote that piece? What was his name? Are there others? How many of them were there? We'll get to that.

But first, some political science, or as my mentor Saul Alinsky would say, "We should start with what the world is, not as we would like it to be."

This unelected cabal of federal government employees—the Deep Staters—are getting away with subverting the will of the people. In fact, the Constitution is being stomped upon by the actions of the members of the Deep State. They are in all branches of government and they are hiding among two million other federal employees.