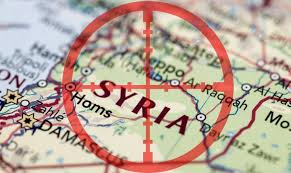 What's happening now in Syria has the potential to start WW III – numerous American, British and French aircraft carriers, submarines and fighter jets have converged just off the Syrian coast, while Russian warships and planes are scrambling to defend and retaliate.

Although Americans are starting to wake up, many people are still caught up in the mainstream narrative regarding the Syrian war. I have written a book and many articles on this topic, but perhaps what the average person needs is a really short article that highlights the truth and debunks the common lies about Syria, Assad and the war.

Nope. Fact is that, starting in 2011, tens of thousands of foreigners – Al Qaeda and other jihadists – were sent into Syria to overthrow Assad. The US and its allies – Saudi Arabia, Qatar, Turkey and Jordan – assisted in buying and transporting weapons to the "insurgents." Special forces from the US, UK, France and Israel also spent billions of dollars arming and training the terrorists, a.k.a "moderate rebels." What's happening in Syria is not a civil war – it's a proxy war.