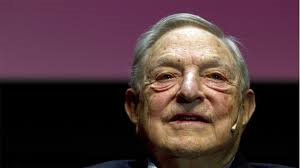 After a historic drop in cryptocurrency prices in the first quarter, one which deflated much of the euphoria that surrounded the sector in late 2017 and the start of this year, the space is about to get exciting again because none other than 87-year-old billionaire George Soros is reportedly preparing to trade cryptocurrencies as prices plunge.

According to Bloomberg, Adam Fisher -who oversees macro investing at New York-based Soros Fund Management - has received internal approval to trade virtual coins in the last few months, "though he has yet to make a wager."

The question, of course, is whether Bloomberg's leak is accurate, and if indeed Soros is only now getting started in the space or if he has quietly loaded up already.

What is ironic, is that just three months ago when speaking at the World Economic Forum in Davos, Soros said digital coins cannot function as actual currencies because of their volatility, "but he didn't predict the hard tumble that some observers had forecast at the time."

"As long as you have dictatorships on the rise you will have a different ending, because the rulers in those countries will turn to Bitcoin to build a nest egg abroad," Soros, 87, said on Jan. 25.