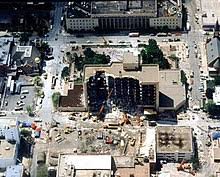 Oklahoma City, OK – In what can only be described as a bombshell revelation, a former independent black ops contractor, Cody Snodgres, recently blew the whistle on a plot in which he alleges that he was offered $1 million from a CIA contact to bomb the Alfred P. Murrah Building in Oklahoma City — prior to the deadly bombing of the federal building on April 19, 1995.

"For over 20 years, I was an Independent Contractor (IC), specializing in sensitive, covert assignments, as well as bodyguard work. In 1994 I was given the task to blow up the Alfred P. Murray building in Oklahoma City. This job came from an x-US military man, who told me he worked covertly for CIA. I refused on moral grounds. My strong opposition to attacking U.S. citizens on our own soil changed my status from a CIA asset into a liability, a private, Independent Contractor who 'knew too much'".

In radio interviews on December 4 and 5, Snodgres, who subsequently refused the offer to blow up the Alfred P. Murrah Federal Building, gave testimony that detailed the nefarious offer.

Ironically, Snogres was in a near-fatal car accident only hours after his whistle-blowing radio appearance, according to reports.

Snodgres left an audio message after the crash with further details.

While it may seem like the stuff of Hollywood spy movies to intimate that the two-car collision, in which both vehicles were reportedly totaled, was an assassination attempt, it is indeed a means to an end by the state. A little research into the case of reporter Serena Shim, who was the first journalist to report on links between ISIS and the Turkish government, and who was killed in what was reported to have been a car accident—but that most analysts suspect was an assassination by vehicle—reveals intelligence assassinations being carried out in this exact manner.